Solid state drives have been the standard for top-of-the-line performance when it comes to storage due to their incredibly fast speeds compared to traditional hard disk drives. PCIe NVMe M.2 SSDs are the newest generation of solid-state drives, featuring a slimmer form factor and tons of new features.

For anyone interested in gaming or media production, an SSD is essential for maintaining blazing fast performance, especially with media-heavy applications.

We have compiled the five best 1TB NVMe M.2 SSDs for gamers and professionals. Listed below are the features which make each of these SSDs the top of their class: 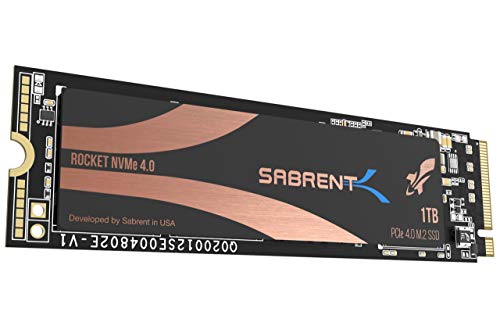 When you’re looking at SSDs, the
latest and greatest usually doesn’t come cheap. Well, that’s not the case with
the Sabrent Rocket 1TB drive, which is an NVMe drive that makes use of the PCIe
4.0 speeds to give you best in class performance at a reasonable price.

Now, that lower price compared to the
competition does come with a drawback – heat dissipation. Even though it
shouldn’t be too much of a problem, if you’re going to be using it at high
speeds for extended periods of time, you might want to consider a motherboard
with an M.2 heatsink. If that’s okay with you, this is quite possibly one of
the best 1TB NVMe M.2 SSDs. 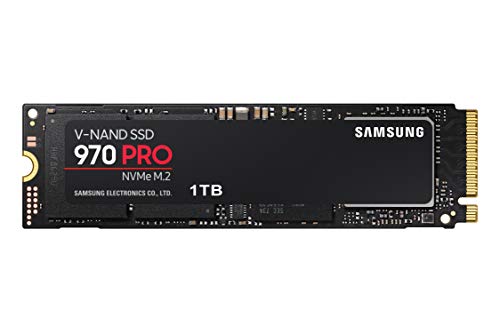 The Samsung 970 PRO Series M.2 SSD sports some impressive technology. The 48-Layer V-NAND architecture, which refers to the way the flash memory cells are vertically stacked versus the planar arrangement of regular NAND, allows for twice the speed and ten times the longevity of some other drives. Moreover, this drive supports the latest PCIe Gen 3 x4 setup, resulting in blazing fast sequential read speeds up to 3500 MB/s and write speeds up to 2100 MB/s.

Moreover, The 970 PRO features a robust 5-year limited warranty and uses Samsung’s proprietary “Magician” software, making it one of the best drives for both peak performance and long-term use. Overall, the 970 boasts the fastest read speeds as well as all the professional features one can expect from an enterprise level drive, making it the best choice for an SSD. 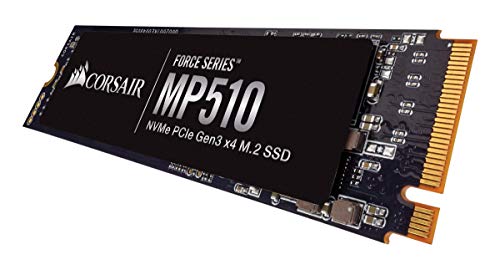 Corsair is a well-known manufacturer of SSDs, and their contribution with Force Series MP510 is a force to be reckoned with. The drive supports all the regular performance-boosting technologies of PCI Express, as well as SATA 3.0 support and enhanced error bit correction for improved speeds and data retention.

Additionally, Corsair’s drive software makes it easy to perform a secure wipe, clone drives, FW update, and create new provisions. The MP500 can compete with other top-tier SSDs with maximum sequential read speeds reaching up to 3,480 MB/sec and fantastic write speeds up to 3,000 MB/sec. It also has a 5-year warranty. Simply put, this drive is a great option for a gamer or professional who needs fast download and data transfer speeds.

The first
name that comes to mind when you’re looking at storage devices is undoubtedly
Western Digital. Even though they’re most famous for their hard drives, they
also have some really good SSDs. And to add to that, the prices are pretty
reasonable for what you get.

The SN750
in a 1TB capacity hits the sweet spot for a lot of people who want a
high-speed, high capacity drive but don’t want to spend a lot of money on it. If
you have a motherboard that only supports up to PCIe Gen3, you’ll make the most
of it with the SN750. You can expect up to 3470MB/s read and 3000MB/s write
speeds, which is just about right for such a drive.

With an M.2 2280 form factor, the SN750 is compatible with most motherboards out there, whether it’s a laptop or a desktop board. And even though it doesn’t have a heatsink, it’s made in a way that doesn’t require one, yet it remains cool. If you want a reputable brand, high speed, and high capacity, on a budget, this is the one to go for. 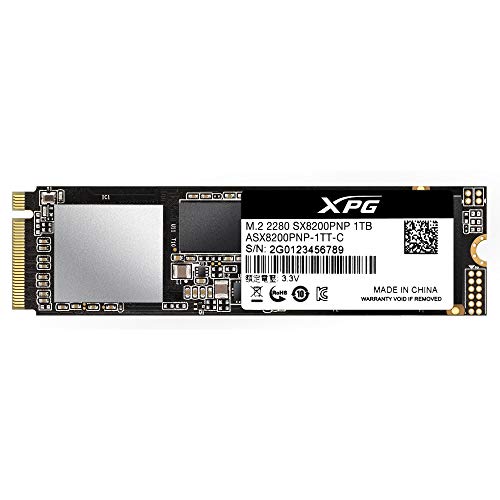 ADATA have been around for a while, and they’ve got some truly excellent solid-state drives with fairly competitive prices. Their XPG SX8200 Pro is one of their higher-end models, with high read and write speeds and an M.2 2280 form factor.

For starters, you have a PCIe NVMe Gen 3 x4 interface. The maximum speeds that you can expect are up to 3,500 MB/sec read and 3,000 MB/sec write, which is great for intense applications where fast storage can be helpful.

You’ll also get LDPC error-correcting code technology, as well as E2E Data Protection, which makes sure your data is safe, and the integrity has been maintained. It’s interesting that the SSD also comes with a heat sink, which should help if you’re putting it in a small space, such as a laptop body.

With a 640 TBW rating and 2 million hours of mean time between failures, you can be sure that this is a very durable SSD. 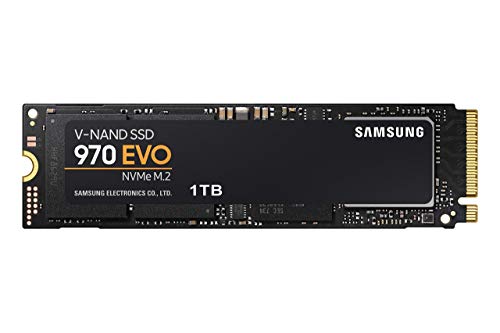 For a slightly more economical option, but with all the bells and whistles, the Samsung 970 EVO is an M.2 that packs nearly the same power as the PRO. The drive features the same patented V-NAND architecture, as well as the Samsung Magician software which helps maintain the drive’s performance and can help perform a variety of drive utilities. The 970 EVO has slightly slower but still, lightning-fast sequential read speeds up to 3500 MB/s and writes speeds up to 2500 MB/s. In addition, A 5-year limited warranty is included, wrapping up the feature set to make this drive worth consideration for anyone looking for an M.2 SSD. 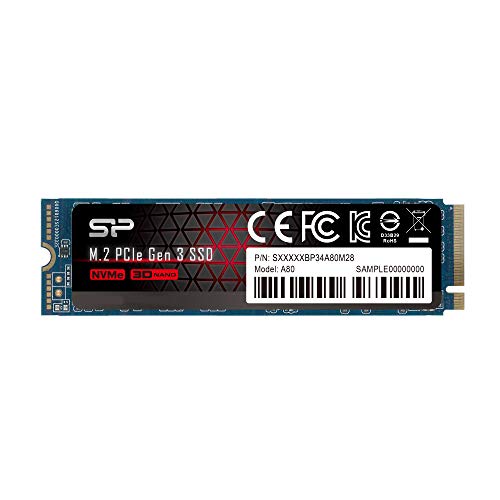 Silicon Power have been around for a
while, and they’re pretty popular in the world of people who want good
performance and a reputable brand, but at a reasonable price. Their 1TB SSD is
a great pick, and it comes with excellent specifications.

Read and write are up to 3400MB/s and
3000MB/s, respectively, which is the most you will get from any PCIe 3.0 SSD.
The fact that you’re getting this at a reasonable, budget-friendly price, makes
this an excellent pick.

The form factor is M.2 2280, which
should fit in most desktop motherboards, and even better, in most laptop ones,
too. Note, however, that you must have an M.2 connector without a B key, but
only an M key. If there is a B key, it’s going to prevent the SSD from being
inserted. Make sure you check this before buying.

If you’re on a budget and don’t have an X570 motherboard, the Silicon Power 1TB NVMe SSD is a great SSD to go for. 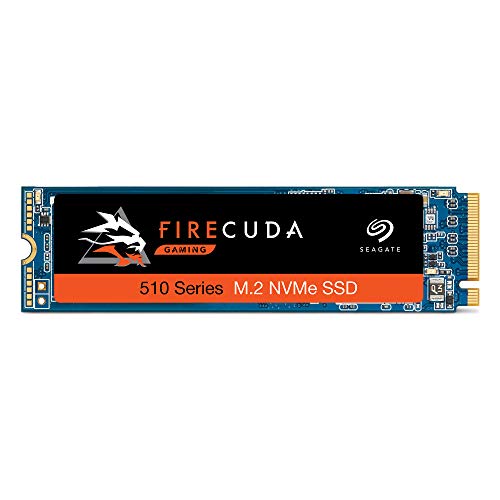 The
Seagate Firecuda 510 is the older, slightly slower brother of the Firecuda 520.
It’s still an impressive SSD, and it comes at a pretty reasonable price
considering it’s from a very reputable brand and has a 1TB capacity.

The speeds
are as high as you could expect a PCIe Gen 3 drive to provide – 3450MB/s reads
and 3200MB/s writes will keep things moving really fast, and the high IOPS will
keep things consistent, whether you’re streaming, downloading games, or playing
them.

The form factor is M.2 2280, which does guarantee compatibility with a host of motherboards. One more thing that we loved is the 1.8M hours MTBF, which stands for mean time between failure. This is a testament to the durability of the Firecuda and is one of the best selling points. Add to this the 5-year warranty, and you’ve got yourself an impressive drive for a reasonable price. It’s close to as good as you’ll get on a non X570 motherboard at the moment, and it’s definitely a great pick for day-to-day usage. 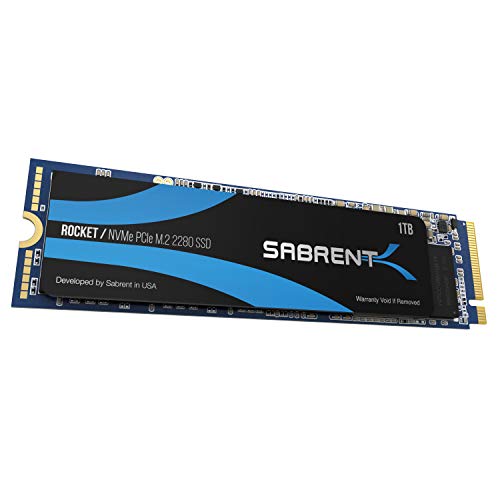 While brand names are often the only choice for hardware enthusiasts when it comes to super-fast storage, that usually commands a significant price premium. This is where brands like Sabrent come in, offering high-speed drives with large storage capacity at prices way below the competition.

The Sabrent 1TB Rocket SSD is one of their M.2 2280 internal SSDs, with a Gen 3 x4 PCIe interface. If your motherboard supports such a slot, you can expect a data transfer rate of up to 3,450 MB/sec and 3,000 MB/sec for read and write. This is almost comparable to some high-end drives that you can buy on the market. The drive is PCIe 3.1 compliant and NVMe 1.3 compliant, and has support for SMART and Trim commands.

One thing that you’re getting, and you may have not expected is the bad block management, advanced wear leveling, and over-provisioning – all are features that the drive has, but are usually reserved for the higher end drives. All things considered, the Sabrent Rocket 1TB is a great M.2 SSD for users on a budget. 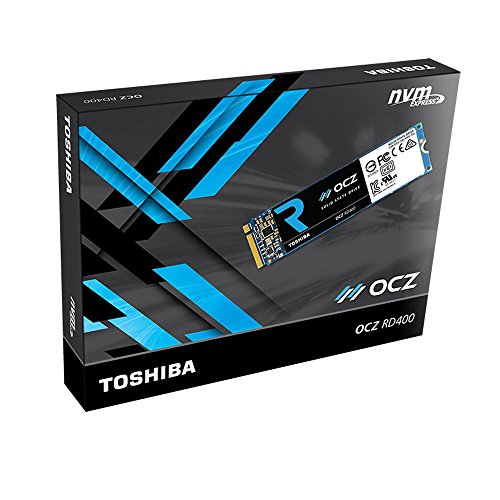 The Toshiba OCZ RD400 Series M.2 SSD is designed for desktop, mobile, and workstation applications. This drive has everything it takes to make it a good choice for anyone looking to increase storage capacity and speed on their portable device or new desktop.

Additionally, it has a good sequential read speed of 2600 MD/s and writes speed of 1600 MB/s, making it a decent choice for all-around usage than some of the other drives on currently on the market. Pair that up with a 5 year “Advanced Warranty” and Toshiba’s customized high-performance drivers, then you have a drive that is likely to serve you well and for a long time.