When it comes to gaming PCs, many gamers will agree that aesthetics are very important, almost as important as the specs themselves. And while many will opt for a multicolor scheme, some prefer the simple and more elegant of a white gaming PC. White does go well with any color peripherals, and it can look great in certain setups. But seeing as not all of the white gaming PCs available out there are worth their price, you’ll want to be careful when choosing. Below are 8 of the best white gaming PCs currently available. These white desktop computers also have decent to phenomenal specs as you go down the list.

The best white gaming PCs can also come with specifications for those who are limited by their budget. The Skytech Gaming ArchAngel is a prime example, with a cost that’s a fraction of what most good PCs cost, and performance that should provide a pleasurable 1080p gaming experience.

At the core is AMD’s Ryzen 3 1200 CPU, a quad-core processor with a base frequency of 3.1GHz. Games will rely on Nvidia’s GeForce GTX 1050 Ti GPU, an entry-level graphics card with 4GB of VRAM. You also get 8GB of RAM and a somewhat slow but large 1TB hard drive. Everything is packed inside a white case with a futuristic look, and powered by an 80 Plus certified 500 watt PSU. 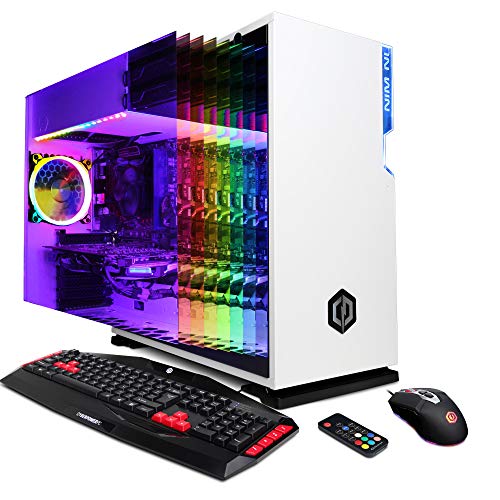 You don’t need the highest end components to get an enjoyable gaming experience, and the Gamer Xtreme is proof of that. Packed inside one of InWin’s stunning white cases with a tempered glass side panel and RGB lights is a very well balanced gaming system.

The brain of the PC is Intel’s Core i5-9600K CPU, a six-core processor with a base frequency of 3.7GHz. The graphics card is an Nvidia GeForce GTX 1060, which is a respectable midrange GPU able to run modern games at 1080p with good FPS numbers. Finishing up this build, we have 8GB of DDR4 RAM, as well as two storage options – 240GB of SSD storage for your operating system and a few games, and a 1TB hard drive for everything else. 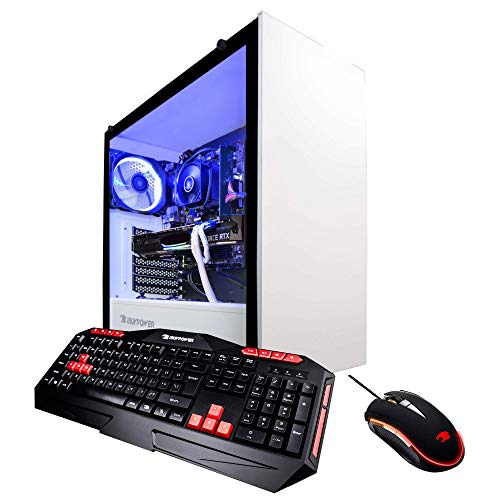 The high-end gaming market isn’t completely dominated by Intel, and iBUYPOWER’s Elite Gaming PC is a prime example that AMD can deliver great performance in a gaming PC. The Ryzen 7 2700X is an eight-core powerhouse with a base frequency of 3.7GHz and a maximum turbo boost of 4.3GHz. Alongside it is Nvidia’s midrange GeForce RTX 2060 graphics card with ray tracing and 6GB of VRAM.

That combination is VR ready and should be able to push AAA titles at 1080p with ease. Add to that 8GB of DDR4 RAM, a 240GB SSD for your OS and a few of your games, as well as a 1TB HDD, and you’ve got a great system. And, it’s packed inside iBUYPOWER’s stunning white case with a tempered glass side panel and RGB lights. 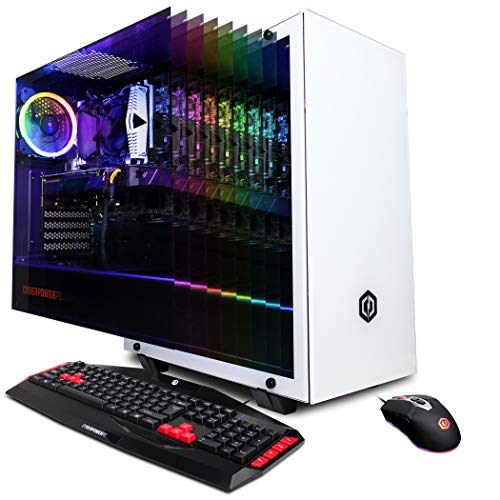 CYBERPOWERPC aren’t all about the high-end only, they have some excellent white gaming PCs that don’t cost too much as well. Their Gamer Xtreme VR is a great example of this, powered by a six-core Intel Core i7-8700K and Nvidia’s ray tracing-enabled RTX 2060 graphics card.

This white PC is an excellent option for 1080p and 1440p gamers who are somewhat limited by their budget but want one of the best white gaming PCs for their money. Rounding out the build we have 16GB of DDR4 RAM, as well as a large 1TB SSD, and some RGB lights in the case to add the finishing touch to the build. 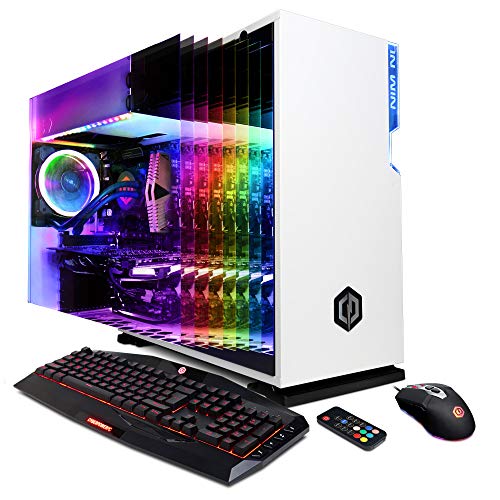 CYBERPOWERPC have crammed a powerful CPU inside a stunning white InWin case and paired it with a decent GPU. The CPU of choice is Intel’s Core i9-9900K, which is a high-end processor with eight cores, sixteen threads, a base frequency of 3.6GHz and a turbo boost of up to 5GHz. It can run pretty much anything you throw at it.

It is paired with Nvidia’s brand new GTX 1660 Ti graphics card with 6GB of VRAM, which is a bit underwhelming compared to the CPU. However, it should be good enough for 1080p gaming. 16GB of RAM and a 1TB SSD round out the build, and everything looks stunning with the added RGB case lighting. 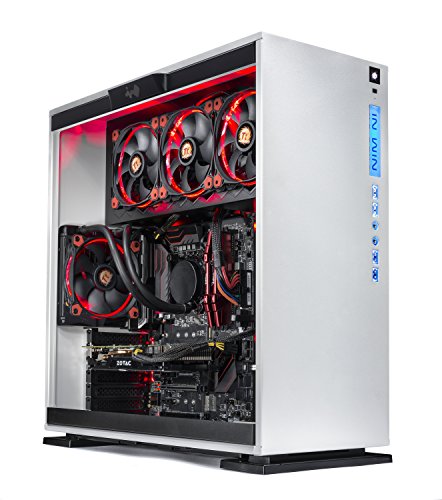 When you’re looking for a stunning white gaming PC that also performs great, there are a few cases that make for a great platform. The InWin 303 is one of them, and it’s the case of choice for Skytech Gaming’s Omega gaming PC. Inside the tempered glass side panel case is Intel’s eight-core Core i7-9700K. It has a base frequency of 3.6GHz and can turbo up to 4.9GHz, which is impressive.

To help with the visual side of things, you get Nvidia’s GeForce RTX 2080 graphics card with 8GB of dedicated video RAM, which should net you respectable frame rates at both 1080p and 4K gaming. Aside from that, you’re getting 16GB of RAM, which is respectable, as well as a 500GB SSD. Everything is put together on a Z390 motherboard, which is a nice bonus and a sign that Skytech didn’t cut corners. 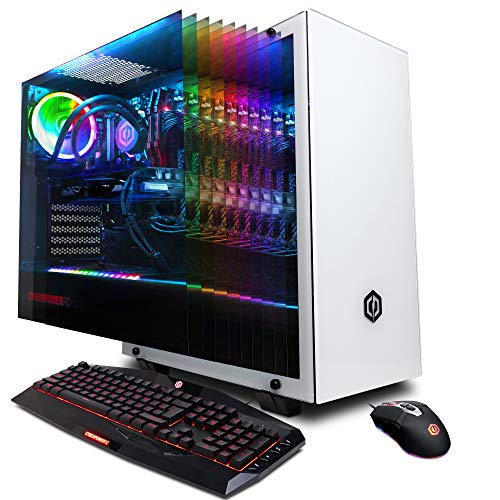 CYBERPOWERPC are well known for their pre-built systems, which come at various price ranges and with various performance levels. Their Gamer Supreme is one of the best white gaming PCs if you don’t want to go all-out with your spending.

At the core is Intel’s Core i9-9900K processor, which is liquid cooled so you can overclock it if you want. The GeForce RTX 2080 isn’t the highest end model, but it’s still a respectable GPU for 1080p, 1440p, and even 4K gaming. There’s 16GB of RAM for multitasking, and the 480GB SSD should be enough for your operating system and a few of your games. Everything else can go on the 3TB hard drive. 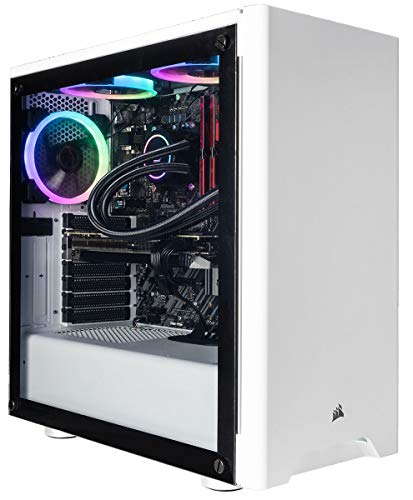 Computer Upgrade King’s Sentinel II is a pricy beast, but it’s certainly one of the best white gaming PCs. With an eight-core, sixteen-thread Intel Core i9-9900K CPU, this is a true powerhouse. Graphics are taken care of by Nvidia’s top-of-the-line GeForce RTX 2080 Ti graphics card with 11GB of VRAM. This combination can run just about any game at high settings, and at high frame rates.

Add to that 32GB of RAM for multitasking or heavy workloads, and you’ve got yourself a very powerful system. Storage is taken care of by a fast 1TB NVMe SSD, and there’s an extra 2TB hard drive for movies and data storage.