How to Install a CPU Cooler?

The overheating will make your system unstable and crash, restart, thermal throttle, or even fry the CPU and motherboard if your CPU is old and does not have a built-in system to shut down itself if it detects dangerous temperatures. Thankfully, installing the cooler is quite easy and everyone can do it. So, here is how to install a CPU cooler.

How to Install an Intel CPU Cooler 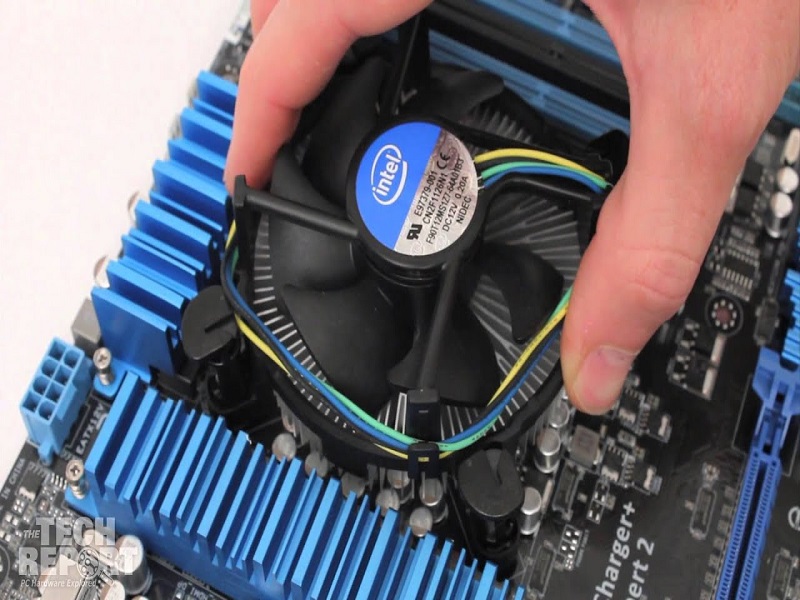 Everyone who has tried to install Intel’s push pin CPU cooler knows that it is very tricky and not at all intuitive. There are some arrows on the push pins and the mechanism looks very intimidating. Thankfully, if you follow everything step-by-step, then you can’t make a mistake and you will successfully mount the cooler in a matter of minutes. Here is how.

Before doing anything with the cooler, make sure that you apply some thermal paste. If your cooler is brand-new, it probably has a layer of thermal paste already pre-applied. You can check by flipping the CPU cooler around and looking at the base. If you see a greyish-white compound that looks a bit like toothpaste, you are good to go.

If not, applying thermal paste is very easy. After buying a syringe with thermal paste, simply squeeze a pea-sized blob or make a thin line at the center of the CPU. That is pretty much all you have to do. If there already was thermal paste on the processor, you will have to clean it using isopropyl alcohol and a dry cloth or a paper towel.

Step 3 – Line up the Cooler

You can see that there are four holes in each corner around the CPU socket. These holes are reserved for your CPU cooler to mount and that is exactly where the push pins should be. Simply line up your CPU cooler so that all push pins are sitting on top of those holes but don’t do anything else yet. Never lift your cooler once you have put it onto the CPU because you will mess up the thermal paste and will have to start over. Simply wiggle the cooler very gently to set it in place.

After double-checking that all push pins are right where they should be, hold your cooler with one hand and push the pins in using your other hand. Make sure that you keep it steady and that you do one corner at a time. Always do the opposite corner after pushing one in to install it properly and to distribute the pressure evenly.

Once you have pushed in all four pins, try gently wiggling the cooler to see if you have mounted it correctly. If one side gets loose, try to pull it out and then push it back in.

Now that your cooler is in place, it is time to plug in the fan header. This is a 4-pin fan, as opposed to the 3-pin case fans because the fourth pin is for RPM control. Nonetheless, 3-pin and 4-pin headers and connectors are completely compatible.

All you have to do is simply locate the fan header on the motherboard. The usual position is on the top right side of your cooler, next to the RAM slots. Make sure that you align the cooler connector with the pins and just plug it in and that is all you have to do. Turn on your computer and visually inspect that your cooler is indeed spinning.

How to Install an AMD (Wraith) CPU Cooler 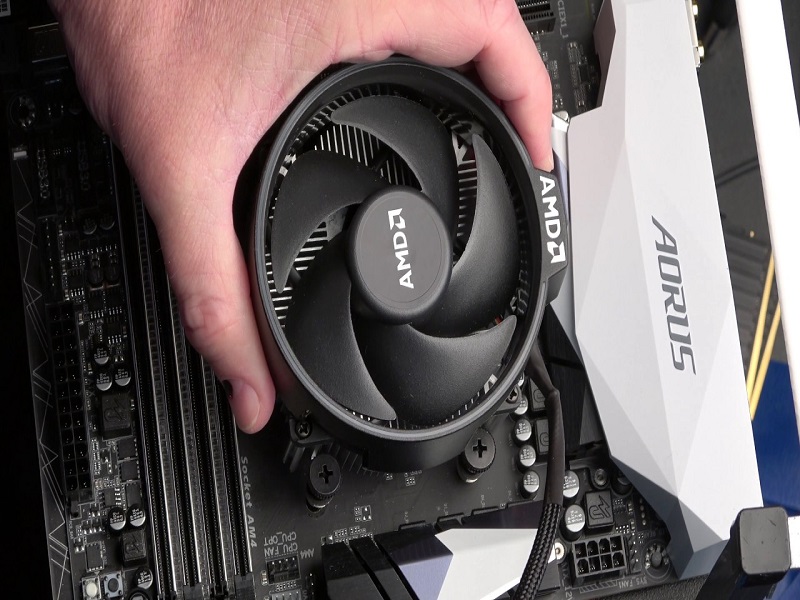 Just like with any other cooler, the first thing to do is to apply thermal paste. You can see above how to do it. But if your cooler is brand-new and has pre-applied thermal paste, you can skip this step.

If your cooler has retention clips, do not remove the pre-attached brackets that come with the motherboard. You will need them. However, spring-screw coolers have to be screwed in, so the brackets have to go. You have to be very careful with this step because once you remove the brackets, the backplate that sits behind the socket will be loose.

It is best to have someone hold the backplate in place while you are doing this and the following step. Once you mount the CPU cooler, the backplate will stay in place, but before that, it will fall off and there is a small chance that it will hit and damage something, so be very careful.

For the spring-screw cooler, all you have to do is gently place the CPU cooler so that all screws line up with the holes in the motherboard. The reason why the screws are spring-loaded is so that the cooler can create equal pressure. You should not screw in one at a time here. Instead, you want to slowly screw in each one equally. In other words, only tighten the screws a little bit at a time.

Just like with the Intel cooler, all that is left to do now is to plug in the CPU fan into the fan header, and you are done. The fan header is on the top right of the socket. If you are using an RGB cooler like the Wraith Prism, you will also have to plug in the RGB LED. You can check where it is exactly in your motherboard manual. It is most likely right below the CPU cooler. Make sure that the fan spins when you turn your computer on. 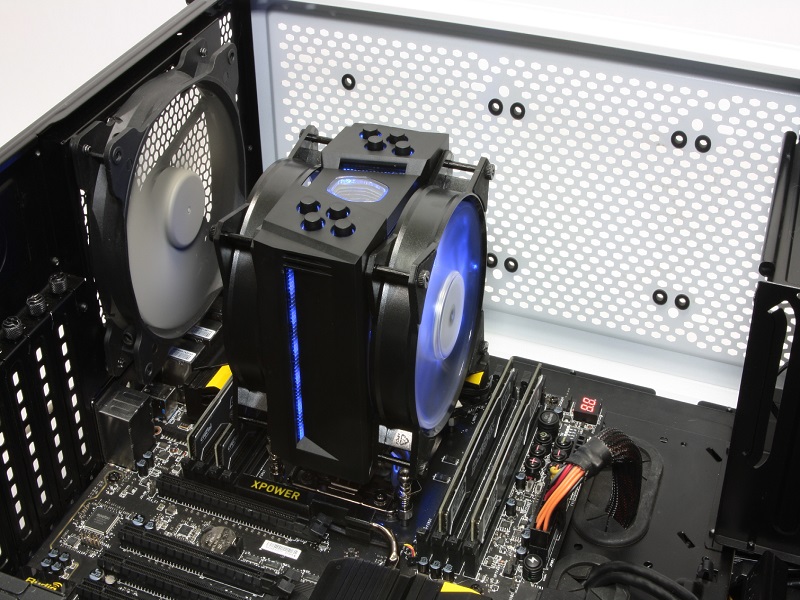 Some aftermarket CPU coolers use completely different mechanisms than Intel or AMD. Nonetheless, the vast majority either uses retention clips or screws, just like AMD coolers. You should check the user manual of the cooler to see how exactly you are supposed to mount it. No matter which cooler you have, you will have to apply thermal paste if it is not pre-applied to the base of the cooler.

You will also have to plug in the CPU fan in the end, though you might want to do it before mounting the cooler if it is very large. Most coolers that use retention clips can be installed using AMD’s pre-attached brackets, but you can also add the ones that come with the cooler. On Intel, the latter is your only choice.

Installing a CPU cooler is not difficult. Most people can do it on their own, but there is no shame in having someone help you, especially if there is a backplate. Intel coolers are somewhat harder to install than AMD’s CPU coolers with spring-screws.

Coolers that use retention clips, like the AMD Wraith Prism, are the hardest to install because you have to hook both clips onto the mounting lugs and you may have to use a little bit of pressure to do so. Remember that you should always use high-quality thermal paste if you do not have any pre-applied paste. Also, never lift the cooler once you put it down because you will introduce air bubbles into the thermal paste that will worsen the cooling.